Albion – A Look at the Class Less Environment

Unlike most MMORPGs that utilize a class-based system for characters, Albion has done away with this altogether. Instead of creating a character to fulfill a specific role, or having to keep changing roles using an NPC within the game, Albion allows for changing at any point in time. This is because it uses a gear-based system instead, where each piece of gear contributes to passive and active skills that you can utilize. 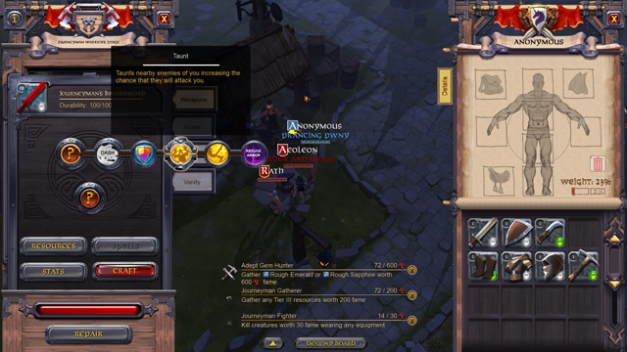 Looking at the Crafts

When it comes to crafting within the game, there is one thing that you have to do with each item: choose which benefits are going to be placed on it. This helps give the game a unique feel (in that most armor and weapons have multiple options with different choices underneath), but it also allows for carrying multiple sets of gear to allow playing in any role at any time. As an example of how this works, let’s take a look at the Journeyman’s Broadsword. This has three slots, and the first one has the following options:

When looking at this list, you’ll notice that they are all pretty much based on tanking. Taunt would be great for drawing aggression of enemies, but Sunder Armor would be good for survivability. In any case, there are options with each piece of gear, allowing you to fully customize it on your own. And some of those skills are active spells; things you need to manually use. Others are passive and are always active. 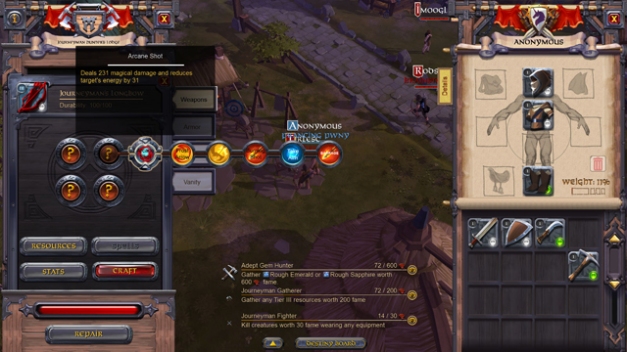 Once you have chosen skills and crafted each item, equip it and on the right side of the screen will be any active spells that can be used. These are also attached to different hotkeys, making it easy to use them in battle. Swapping out gear will swap these skills out accordingly, so essentially what skills are available isn’t determined by level or class, but rather by the gear that is equipped at the current time (which can be changed at any point).

What About Spellcasters and Hunters?

While these may seem a bit different from the melee players at first, they work in the same way. They are able to equip two items: a staff and a spellbook. Both of these work exactly the same as the sword shown earlier: a spell (or more than one) is chosen for it, then it’s crafted and you have use of it when it’s equipped. Furthermore, the same thing works with the bow users as well (“Hunters”). This is great because it means going from being a ranged character to a melee one is as simple as changing from a bow or staff to a sword and shield. Of course, this does require carrying more than one set of weapons and armor. 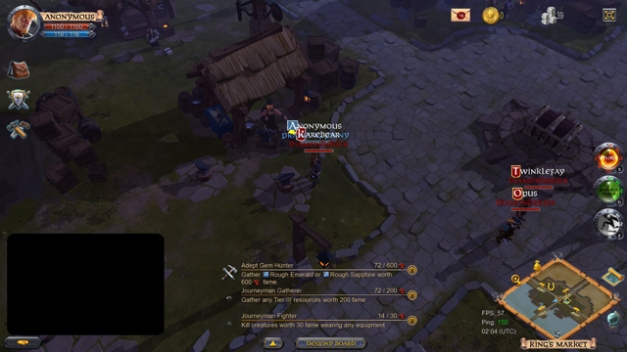 The downside to the class-less system is that you have a maximum weight that can be carried at any given moment. Gear is by far the heaviest thing you can carry, so at least in the beginning it really isn’t viable to carry multiple sets. As you level up and practice weight management, however, it does become possible to carry two or three sets without restricting yourself too much. But then you have to worry about being killed by an enemy player and having it all stolen.

Probably the hardest part about crafting is deciding which skills you want equipped. This is difficult because in a lot of cases there are multiple to choose from that would all fit the same role. What it all ends up boiling down to is personal play style. If you are good at keeping aggression of enemies, for example, taunts can be swapped out with the skills that decrease enemy armor. Or maybe even increases to your attack speed. If you need help with the taunting, however, it would be a good idea to equip that instead. There is really no wrong choice here, but some are going to benefit some players more than others. It helps significantly to experiment with lower level gear to see what matches up best with how you play and what you are most effective with. That will help make much more informed decisions and will boost productivity (and usually survivability) while out on the field.

A huge selling point of the game for a lot of players is that there is no need to choose a class and stick with it. A side effect of this is that it also means no alternative characters are needed. You can play through the game with one character, never needing another, and still enjoy everything it has to offer. This can add a lot more enjoyment to it, as well as decrease the amount of time that would be normally spent trying to level up multiple characters. This isn’t to say that you can’t make more; simply that it’s not a requirement in order to do everything. Through experimenting and learning, you’ll get a better grasp of your own play style and which gear and bonuses most benefit you.